A few years ago, my friends invited me to hike Mount Timpanogos. It is a grueling hike to begin with, but to add to the fun, we decided to start the hike at midnight so that we would be at the top to watch the sunrise. Most of us had never made this hike before. To one degree or another, each of us were unprepared for the long, tiresome, sleep deprived endeavor we were about to undertake.

Since we were hiking in the dark, I stepped wrong near the beginning and slightly sprained my ankle. I didn’t tell anyone because it wasn’t bad and I didn’t want to burden the others with a problem I felt I could handle on my own. The second half of the hike, another member of our group was also having a rough time. Others in our group took turns helping carry their pack as we worked together to make it to the top.

Due to our struggles and lack of experience, our pace wasn’t what we’d hoped for. The sun came up and we still hadn’t reached the summit. We were beaten down, tired, and struggling. Looking up to the summit we could see people who seemed to have it all together and all we could do was continue to look up in awe and wonder if we would ever make it there.

The final portion of the trail was the steepest with quite a drop to the side should you misstep. We had a decision to make. Do we appreciate the views we had, cut our losses and head back, or do we continue on and try to reach our original goal?

I’ve had a similar hike throughout my teaching career. I set out with the best intentions and was excited to see the sunrise of students’ lives I would change. As much as my teacher preparation program helped me, I still felt a little in the dark at times.

That first year of teaching is hard! I often limped my way through it not wanting to burden the other teachers around me that had a huge workload of their own. I’ve always felt very capable and at the top of my class, but sometimes I didn’t even know where to begin to ask for help or even know I needed it. I was doing the best I knew how at something I’d never done before.

As I finally got my footing, I began to notice that others were struggling with some of the same things I was. I have been lucky to have an amazing team at my side throughout my career. We each have different strengths and weaknesses and always help each other along the trail.

It has been my experience that the vast majority of teachers are doing the best they know how. We all want to succeed and to help our students reach the top. This hike is new and even after many years of experience, the next bend can throw something at you that you’ve yet to encounter.

This past school year was an exceptionally hard climb for me. Not only did I feel like I was limping, but that someone had filled my backpack with rocks. I saw where I wanted to be, but I didn’t feel like I was getting there. I looked up and it seemed like every other teacher had it all together and all I could do was look up in awe and wonder if I’d ever get there.

I’d been on this hike for nine years now, shouldn’t things have been getting easier? The trail was becoming steeper than ever. I had a decision to make. Do I keep pushing and climbing, or was I really just not cut out to be a teacher?

My shortcomings certainly weren’t for a lack of trying, which made it sting even worse. I don’t know of any other teacher that took more classes, went to more conferences, or was more involved in the education community than I was. I really cared, which made it that much harder when I felt unsuccessful. I wanted to be the perfect teacher at the top of the mountain.

I began to think seriously about leaving the classroom. Deep down inside, I still felt like teaching was my calling and saw myself as a leader. Maybe there was another path up this mountain I could take. I started looking for jobs and opportunities to lead and work outside of the classroom.

I applied for a district coaching job. I wasn’t hired.

I ran for reelection for the Utah Coalition for Educational Technology (UCET) board. I didn’t receive enough votes to receive the position.

So now, not only did I feel unsuccessful at my current job, but I was also receiving more and more confirmation that there wasn’t a path leading up for me anywhere. So, do I continue this overwhelming uphill battle, or was it time to quit?

One day while driving home, Million Reasons by Lady Gaga helped inspire me to stay. As hard as this climb was, I knew that I had a million reasons to stay. I decided to continue the climb.

Around this time, I also found a home and great support system as I became a part of the Utah Fellows, a joint partnership with Hope Street Group and the National Network of State Teachers of the Year (NNSTOY). As I continued to find my voice and became even more involved over the summer, I started this school year with renewed energy to continue my climb.

I did end up making it to the top of Mount Timpanogos. Not everyone in our group did. When you get to the top, there is a ledger where you can add your name to all of the others that have made it to the top and list how many times you have made it.

This year my name has been written all over the education ledger. I was interviewed by the paper about my involvement with Hope Street Group. I’ve had writing published online. I was asked to be a keynote speaker for all of the elementary teachers in Piute School District and to present to the STEM Academy for Administrators. I was invited to be on a committee to design elementary technology standards for our district.

After not being elected to the UCET board last year, I decided to run again and won a two-year term as an elected board member. Since I wasn’t on the board, I was able to be nominated for two different UCET awards and won 2018 Outstanding Young Educator of the Year! Not only that, but I was just named Teacher of the Year at my elementary school!

When I think back to where I was a year ago, it has truly been an amazing climb! I have been given so many opportunities to be a leader and have received a lot of recognition. But when I think back to how close I could have come to not teaching this year, it’s truly humbling. If I could go back a year and tell myself what was around the bend, I don’t know if I would have believed it. It has been an award-winning year that almost didn’t happen. 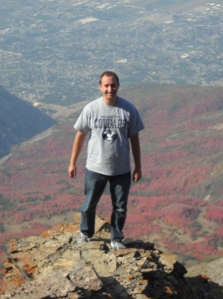 I don’t know if there’s a better felling than working hard and reaching a goal. Winning awards is fun, but if you aren’t enough without them, you will never be enough with them. I also learned that there’s no such thing as reaching the top. There is no perfect teacher at the top of the mountain. You have to continue to learn and grow, you can’t just sit at on the summit for the rest of your life and let it pass you by.

As I stood at the top of the mountain, I couldn’t help but think of everyone who had helped and encouraged me along the trail. While the view at the top was indeed incredible, I thought back to the many breathtaking views on the way up and realized that not only had it been worth continuing on, but the entire journey is one I wouldn’t trade for anything.

If you find yourself feeling the same way I did a year ago on your teaching journey, know you aren’t alone. Even with more recognition this year, teaching is still hard, it’s still a climb. But if teaching is your passion, don’t let anything get in your way. Don’t be afraid of asking for help and always look for ways to lift those around you. We are better together! Surround yourself with good people and enjoy the breathtaking moments along the way. Don’t be so focused on the top that you miss the joy as you go.

Even though I’ve been noticed more this year, I feel like I’m the same amazing teacher I’ve always been. Maybe it was those last few steps up the mountain that finally gave me a clear view and made my climb more noticeable.

Just as we want our students to have a growth mindset, we need to have the same mindset for ourselves. You may never know the impact that you have on your students, your team, your school, and your community. You matter and we need you on this journey!

As I stood on the top of Mount Timpanogos, I saw many more mountains left to climb and many people down below struggling with some of the same things I’ve had to get through and continue to have to overcome. As I thought about all of those that had been instrumental in help me make it here, I came to a realization that it was now time for a new climb.

This upcoming school year, I accepted a position in my district as an Innovative Learning Coach. You may be asking, how can I talk about what a great decision it was for me to stay and then leave? I’ll be honest, I have some serious teacher guilt for leaving. It doesn’t help that my students beg me to stay every day, have made posters, books, and even wrote and performed a song for me pleading for me not to leave.

However, I feel like this is what I need to do now. I have a new mountain to climb, one where I get to help others on their journey. I will get to make an impact on multiple schools and on our district without having to get as many subs and leave my classroom and students as often as I did this year as I took on an increased leadership role.

I look forward to the day when I make this climb again and can add my name a second time to the ledger as an even better and improved teacher. I know that I will continue to learn and grow and overcome more obstacles as I continue to climb and learn with the incredible teachers and schools I am lucky to serve with this upcoming school year.

I’m thankful for the year I’ve had. I’m glad that I didn’t give up and I’m looking forward to my next climb. I hope that we cross paths on our journey and that we can help each other up the path. I know that together we can reach higher than we ever imagined. Never give up, let’s keep climbing.

One thought on “The Climb: An Award-Winning Year That Almost Didn’t Happen”

This is a text widget, which allows you to add text or HTML to your sidebar. You can use them to display text, links, images, HTML, or a combination of these. Edit them in the Widget section of the Customizer.